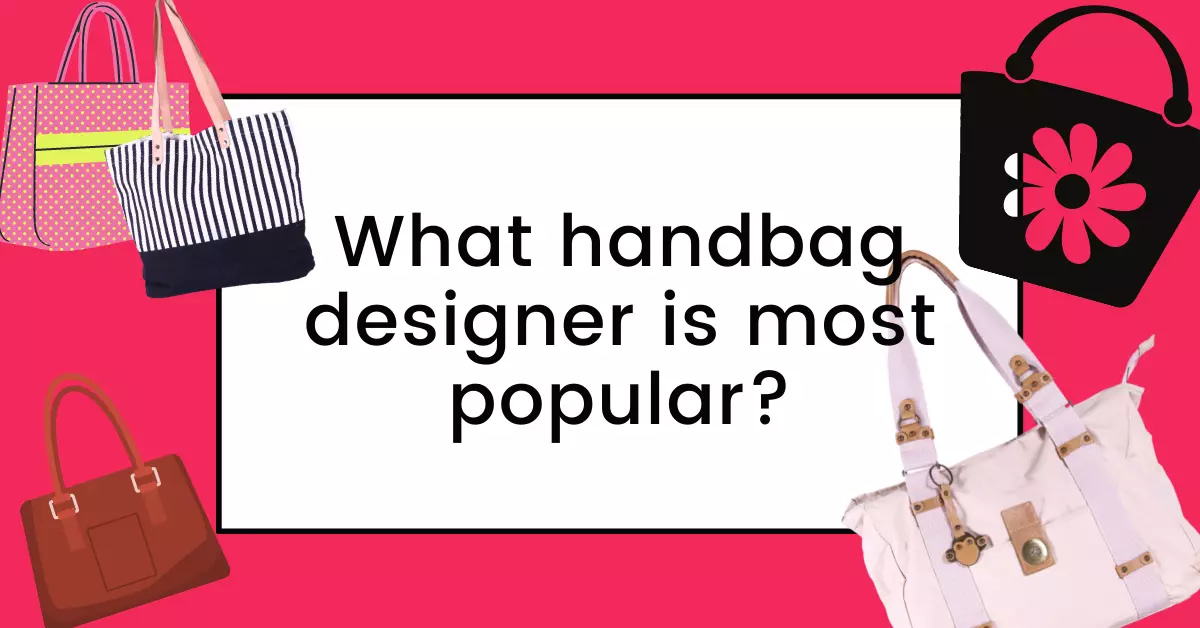 If you want to know, What handbag designer is most popular? Then this article is for you!

The handbag industry is a multi-billion dollar one, and the best part. It’s still growing. With so many options in terms of style, function, size, and more, choosing which brand or bag will be right for you can be challenging.

Moreover, if you’re looking for something that even celebrities use and rave about, these are the brands you need to check out.

Read: Different Types of Bags and Their Names

The 10 Most Popular Handbag Designers On The Planet | What handbag designer is most popular?

Today Hermes operates in 22 countries with approximately $1.6 billion in revenues. Its products are sold in around 900 stores worldwide and online.

Both men and women usually carry the handbags of Louis Vuitton. They are a preferred accessory among the fashionable crowd. Louis Vuitton’s bag designs are recognized all around the world. It is one of the most renowned brands globally because of its exquisite handbags.

Louis Vuitton is one of the oldest, most well-known brands globally. It’s famous for making high-quality products that help customers feel unique and stylish. Their $6,700 bag symbolizes luxury, and it has become a status symbol in the fashion industry.

Fendi is a luxury fashion brand founded in Rome in 1925. In 1961, the company introduced Fendi’s first handbag collection, which was an immediate success and has become a brand’s staple, alongside its fur and leather goods.

It is a popular fact that every woman wants to have Fendi handbags because they are the most stylish and beautiful bags globally. Fendi’s designer knows this very well.

The most popular Fendi bags include the Peekaboo, Fascinate, Baguette, Soho, and D-Baguette. They are all made of high-quality leather and are decorated with excellent craftsmanship.

Gucci is known for its chic Italian designs and high-quality leather goods. The brand is one of the best globally, but it didn’t always look that way. Having been through a few ownership changes, Gucci was on its last legs before being purchased by the Kering Group in 2001. But with a new owner came a new vision, and now Gucci products are some of the most desirable in the industry.

The company offers a range of items from handbags and clothing to shoes and accessories. They have made everything for the perfect accessory for any outfit or wardrobe.

Gucci handbags have been making a big splash in the fashion industry. Gucci bags are known for their luxurious designs and high-quality craftsmanship. They are a brand favorite among celebrities, socialites, and high-end clients worldwide. For many women, owning a Gucci bag is a status symbol.

Handbags are a staple accessory for women, and you see them everywhere. They come in all shapes, sizes, colors, and designs. So how do you analyze which brand is reliable?

Chanel is known for its intricate designs, timeless style, and consistent quality. The company was founded in 1909 by Gabrielle “Coco” Chanel and has since continued to define the industry with its diverse styles and high-quality craftsmanship.

The Chanel Handbags are the ultimate symbols of fashion and status. It is tough to get your hands on these fashionable handbags makes them even more desirable.

Michael Kors is an American fashion designer specializing in accessories such as handbags, watches, shoes, and clothing. He’s also the founder of his retail shops that bear his name. In 2017 these shops generated US$1.6 billion in sales, which is more than the annual revenue generated by LVMH, the world’s largest luxury goods group.

Handbags by Michael Kors is a fashion brand. They have more than 3,000 stores in 120 countries and over 90 stores in the UK.

Handbags by Dolce And Gabbana (D&G)

Dolce and Gabbana is a well-known Italian fashion company famous for its luxury bags. Handbags are essential accessories for women, especially those who like to travel. D&G is an Italy-based company established in 1985 by Domenico Dolce and Stefano Gabbana. The company introduced its handbags in 1988, and since then, it has been producing luxury handbags for ladies from all over the world.

Dolce & Gabbana has been designing and producing handbags since the 1980s. They are famous for their unique style and their use of quality materials in high-end fashion accessories.

The launch of Handbags by Celine was strategically planned to coincide with opening a new flagship store in New York City. With the new luxury bag in stores, the company made it the most talked-about item on social media. It wanted to produce a buzz and make people feel like part of something special.

Handbags have been around for a while now, but Celine came up with the idea of reinventing this classic accessory by adding something that was missing. They made their bags extraordinarily stylish and unique using their signature Phytonic leather. This resulted in more people wanting to get their hands on this designer handbag.

In the early 2000s, handbags became a huge trend. Gucci was the most popular bag brand, and Prada wanted to get in on the action. They created their line of designer handbags, but when they tried to sell them for $300 per bag, no one bought them.

Prada realized that the key to their success wasn’t in their price tag but their packaging. They shifted their marketing strategy and started selling their bags for $1000 per piece. They took out ads in fashion magazines and made it look like celebrities carried Prada bags everywhere they went.

Calvin Klein is a successful fashion brand that has been around for nearly half a century. The company was founded in 1968 by Calvin Klein and has grown to be one of the top brands in the world. The fashion brand is most famous for its clothing, but it has branched out into many other products, including handbags.

Calvin Klein handbags are not as famous as the clothing line, but it does well enough to be included in this list.

Designer Calvin Klein has often been criticized for being overly sexual. He has finally responded to the criticism by creating a new line of entirely G-rated handbags.

Instead of the usual racy photos and slogans, the handbags feature cute little cartoon children who look like they are swearing off swearing. They also hold things like “Don’t say f*ck!” The bags also feature euphemisms for swear words in place of swear words.

It’s undoubtedly hard to know what handbag designer is most popular? The ten most popular designers are all talented, but they vary in price, quality, and style. I’ve researched so you can find the perfect bag to suit your needs quickly and easily!

1 thought on “What handbag designer is most popular?”